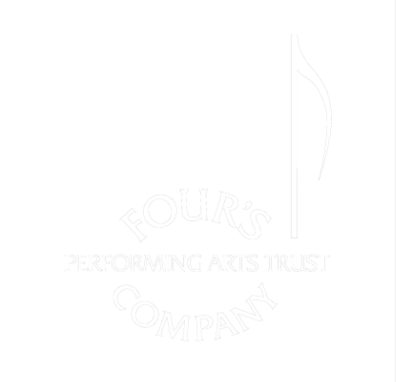 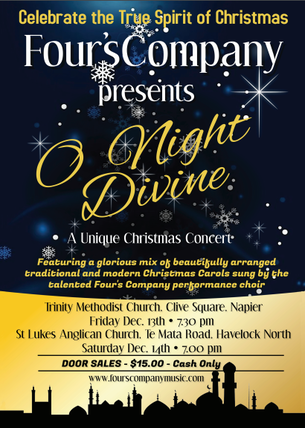 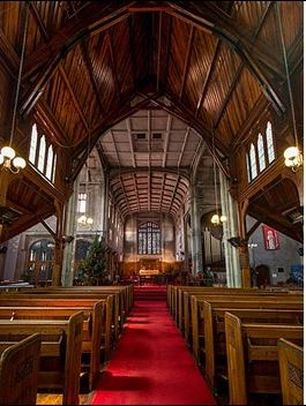 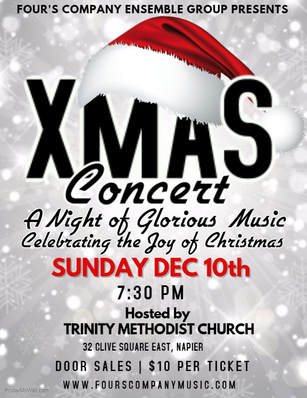 We had a lovely Christmas Carol concert at Trinity Methodist Church in Napier.

With old and new Christmas songs to bring in the start of the festive season.

​No.5 Cafe and Larder Session 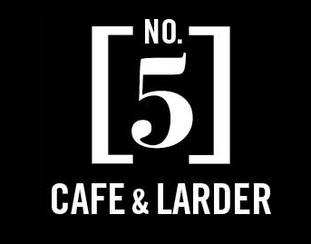 We were invited as special guests to perform as part of the monthly Open Mic Sessions at No.5              Cafe and Larder.

The programme also featured Kathy Fletcher & Linda Gilchrist playing some mellow 'Mancini' on flute and our very own Lisa Eagle brought on the humour with 'The Alto's Lament'. 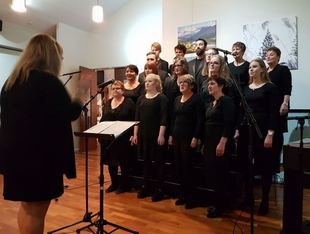 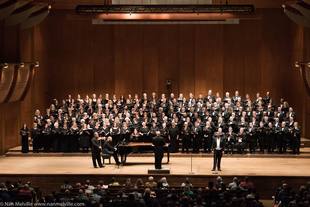 Tyler's mother Jane Clementi attended the performance. She spoke about Tyler, her and her family's experience and the foundation they established in his memory that fights for internet safety and to protect all children from bullying, especially online forms of bullying. A portion of all ticket proceeds to benefit the Tyler Clementi Foundation.

It was a great honour and privilege to be able to sing in such a wonderful and world renowned concert hall with such talented musicians. 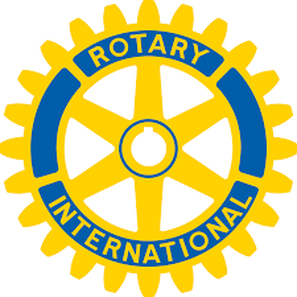 We were asked to sing as part of the local Rotary clubs monthly gathering.

The songs we performed ranged from Climb Every Mountain to Dr Jazz. 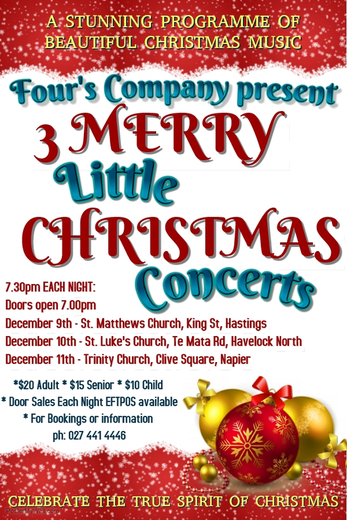 The Performance Choir had 3 concerts in 3 churches in 3 towns.

Bringing Christmas joy and good cheer to all the lovely audiences who came to listen to the beautiful carols.

With Special performances by Grace Notes and Jamie on Cello. 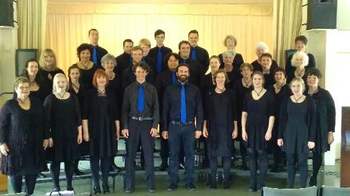 The Performance choir got to sing for the Hasting's Woman's Dinner Club as part of their monthly meet up. 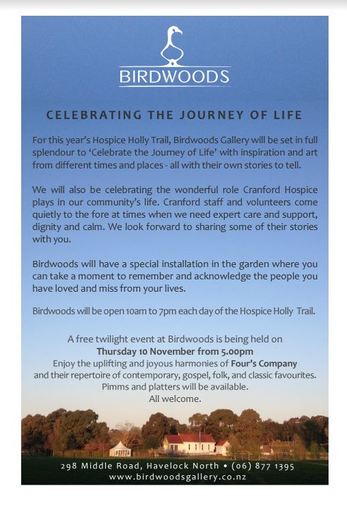 We had the pleasure to be invited to sing as the entertainment for this very special event as part of the Holly Hospice trail.

We had a lovely time singing outside in the gardens while the audience nibbled on platters and sipped on pimms in the warm spring evening,

​In Perfect Harmony - with Stellar Singers 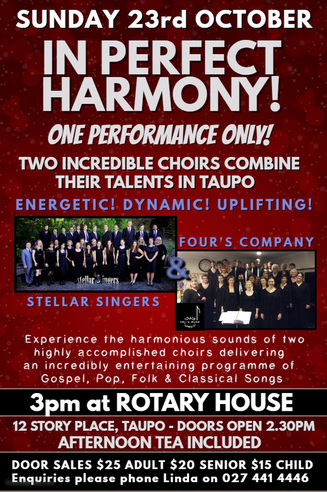 Two incredible choirs, one from Auckland and one from Hawke’s Bay, decided to meet in Taupo combining their talents to bring you a stunning one-off concert on the Sunday afternoon of Labour Weekend!
Both Choirs are known for their modern style, beautiful harmonies and fun presentation and have gained huge popularity in their respective cities.
Stellar Singers’ reputation as “Auckland’s premiere a Capella choir” is well deserved. Bringing a unique sound to the NZ choir scene, they are known for their quality smooth blended full sound,
exciting repertoire and fun stage presence. They embrace every genre of music including contemporary a cappella, jazz, gospel, sacred and secular choral music and barbershop.
They are truly passionate about high quality singing and bringing communities together through their music. As well as hosting their own concerts, they perform at various corporate and professional events most recently singing for NZ Breakers awards evening and backing vocals for an international artist Josh Groban's 2016 World Tour in Auckland.

This was an amazing joint concert that showcased each choirs unique qualities and talents. 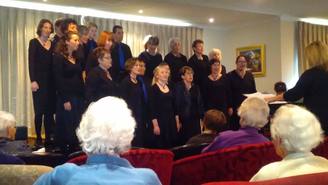 We were invited by the lovely residents of Summerset in Taradale to perform for them.
They were entertained by a whole mix of new songs, from pop, to gospel, to rock.

​What a lovely receptive audience.

​Sing for Your Supper Dinner and Concert 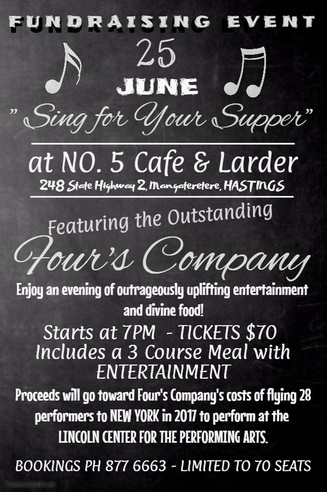 We had a very special fundraising evening at No.5 Cafe and Larder, Hastings.

This involved the audience having a delicious 3 course dinner while being entertained by
Four's Company Performance Choir. 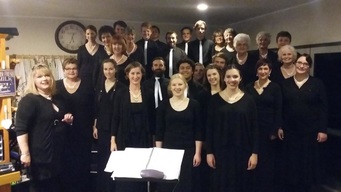 Four's Company was asked to be entertainment at Napier Rotary Clubs presidential handover.
We sang a lovely mini concert for a very appreciative audience. 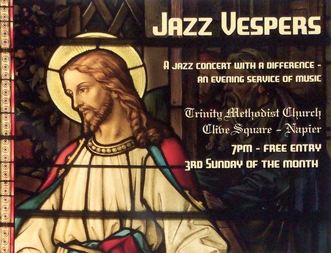 Four's Company were invited to perform as part of the final Jazz Vespers Concert at Trinity Methodist Church Napier.

Also part of the concert was a some lovely Jazz Flute performed by Cathy and Linda. As well as a Jazz trio of Wiki Murphy, Lisa Eagle and Linda Gilchirst.

​
​Best of Both Worlds 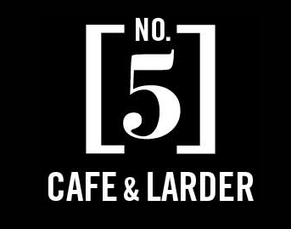 ​
Four's Company was invited to sing as special guests at No.5 Cafe and Larder.
We sung a variety of songs to a lovely and appreciative audience. 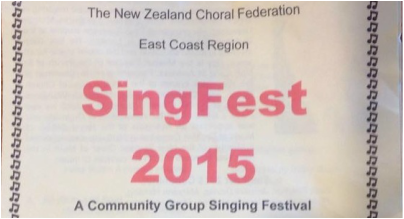 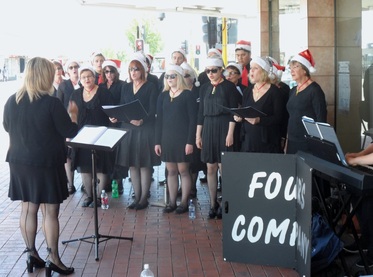 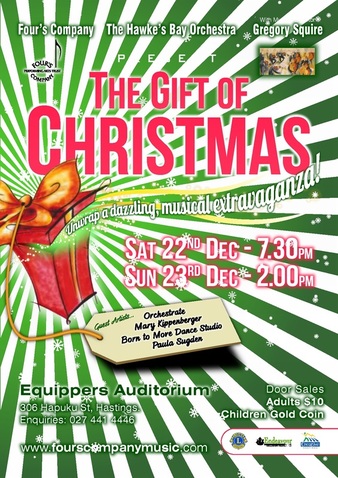 A magical gift of songs and music filled with the love and gift of Christmas, with songs                          from John Rutter and Dan Forrest and traditional songs given a new twist.

Amahl and the Night Visitors